failure is the pillar of success 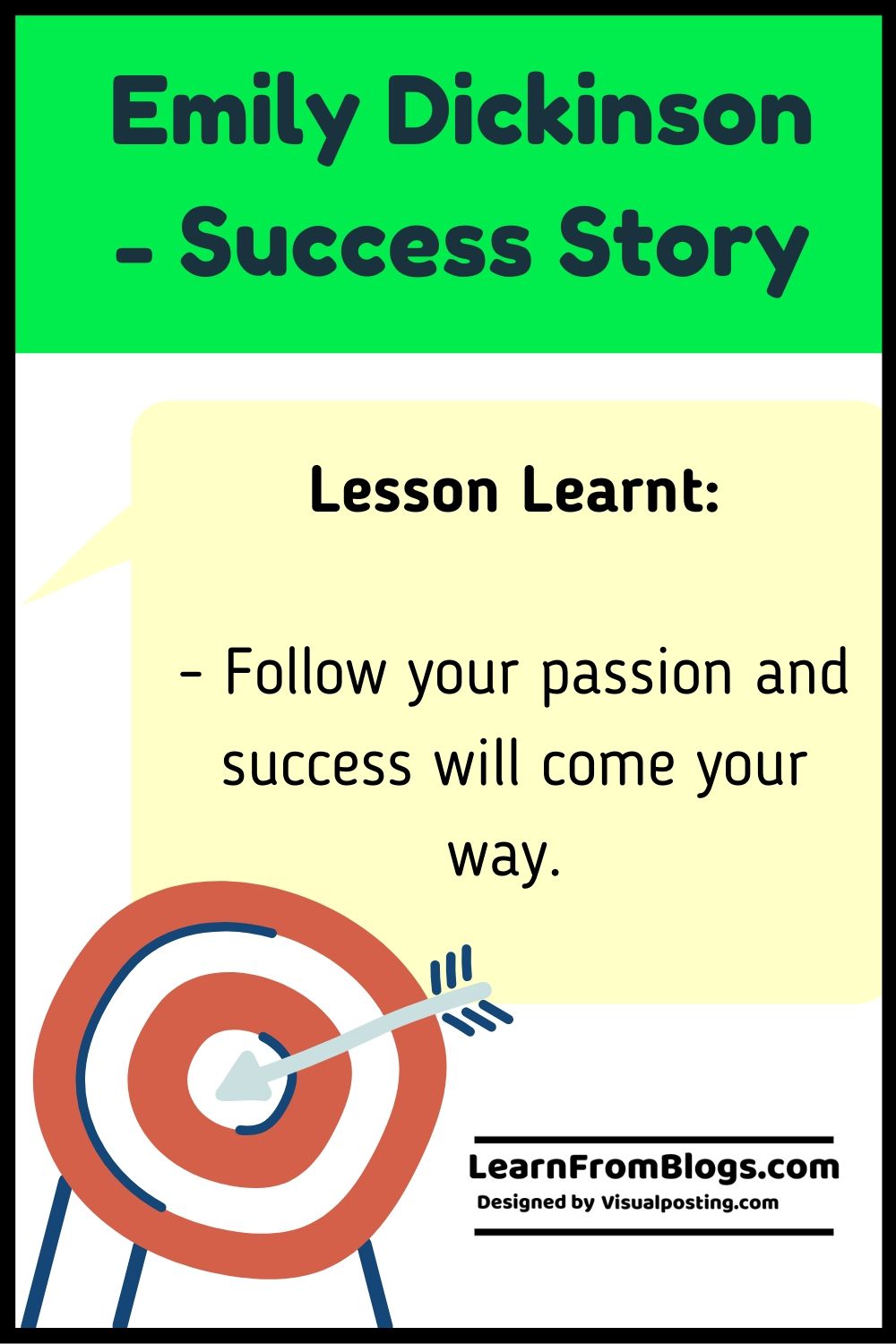 Emily Dickinson is one of the most famous authors of modern times. In true sense, she considered herself a failure for most of her life. She never married and used to spend the maximum of her time writing poems. She is one of the most renowned poets of her time but less than a dozen of her poems were ever published.

After her death, her sister noticed close to 1800 poems stacked up. She eventually published the poems which made Emily gain international fame.

- Follow your passion and success will come your way. 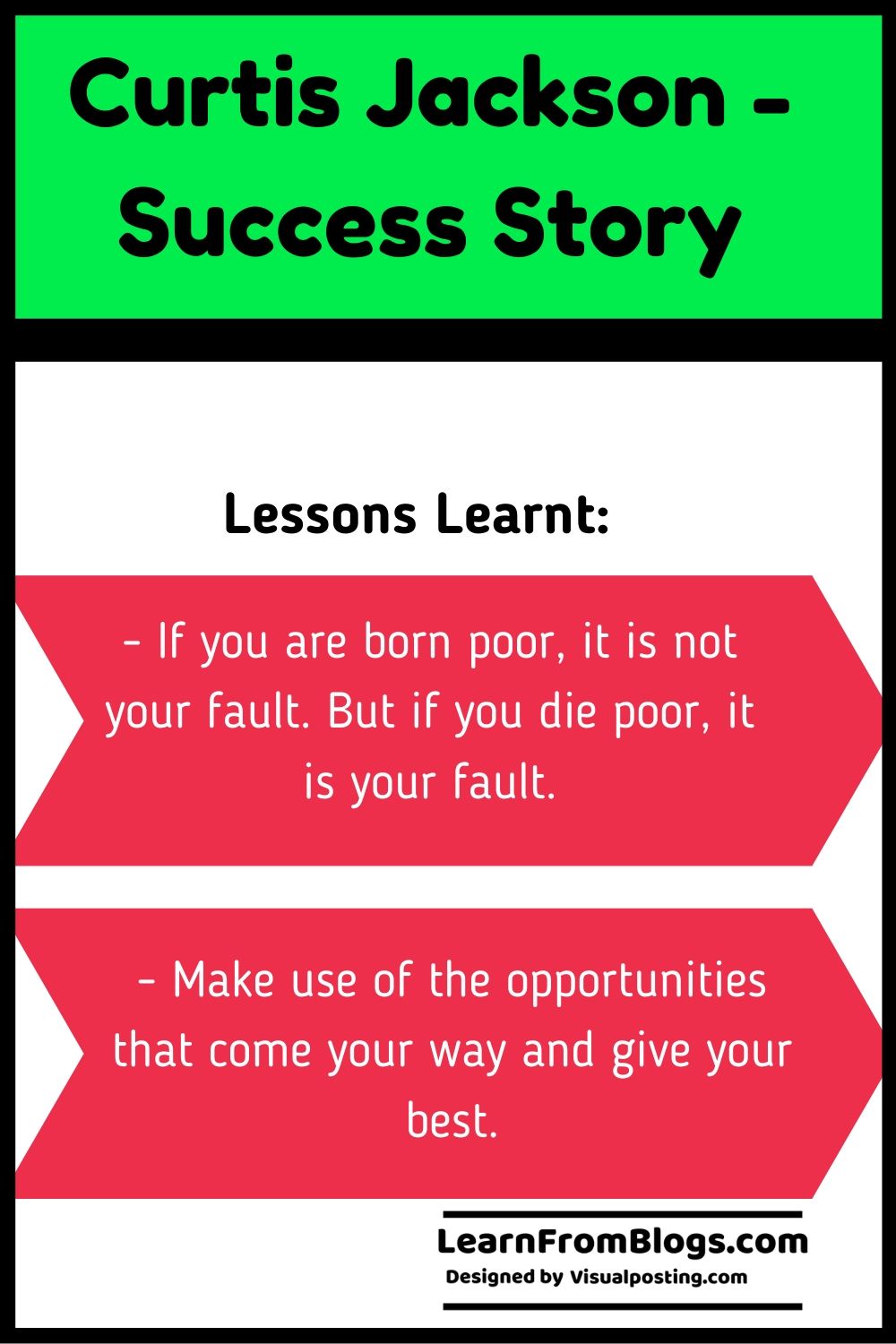 Curtis was born in 1975 in New York. He is professionally known as 50 cents. Curtis had a rough past and a tough upbringing. At an early age, he was surrounded by drugs and crime. Sabrina, his birth mother herself was a drug dealer. When he was 8 years old, his mother died due to some mysterious fire. Eventually, his father too left. Curtis was now left with his grandmother. At the age of 12, he started dealing with drugs. In 1994, he was sentenced to 3-9 years in prison due to multiple accusations. Instead, he was sent to a boot camp for about 6 months.

He adopted the name 50-cent after his release. In 2002, he was signed by Eminem after he heard one of his songs. Ever since then, Curtis is known to be the best rapper and is world-famous.

- Make use of the opportunities that come your way and give your best. 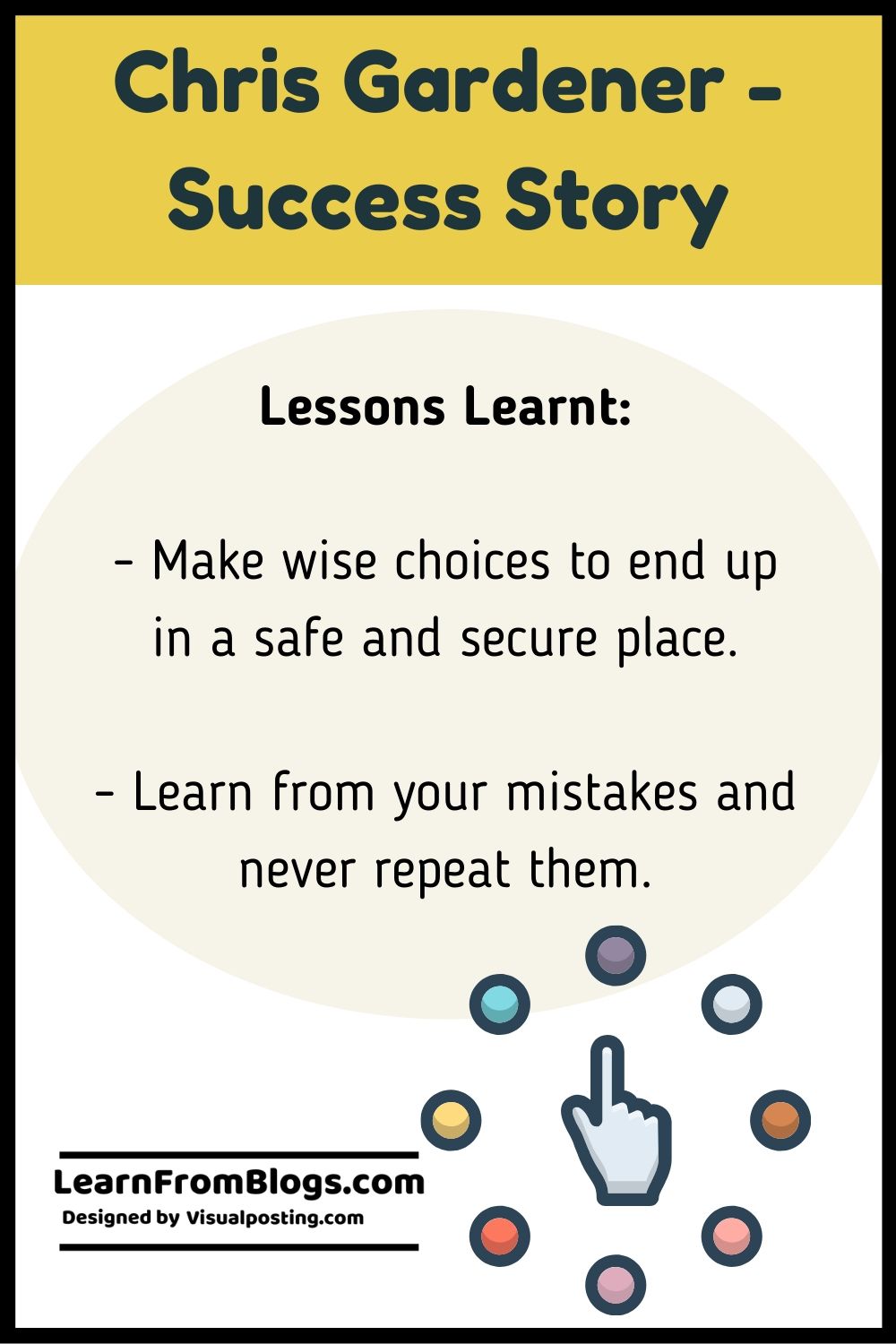 Chris Gardener was born in 1954 and had a tough upbringing. He had a father that was never present while the stepfather abused his mother and siblings. He went in and out of foster care. Chris married in 1977 but an affair with another lady caused her to be pregnant. This was when he decided to leave his wife. After his son was born, he knew he had to do something in life. He decided to be a medical equipment salesman.

Finally, he met a man who showed him the career of a stockbroker. He suffered evictions, divorce, and jail. But in the end, he never gave up and kept trying to better his life.

- Make wise choices to end up in a safe and secure place.

- Learn from your mistakes and never repeat them. 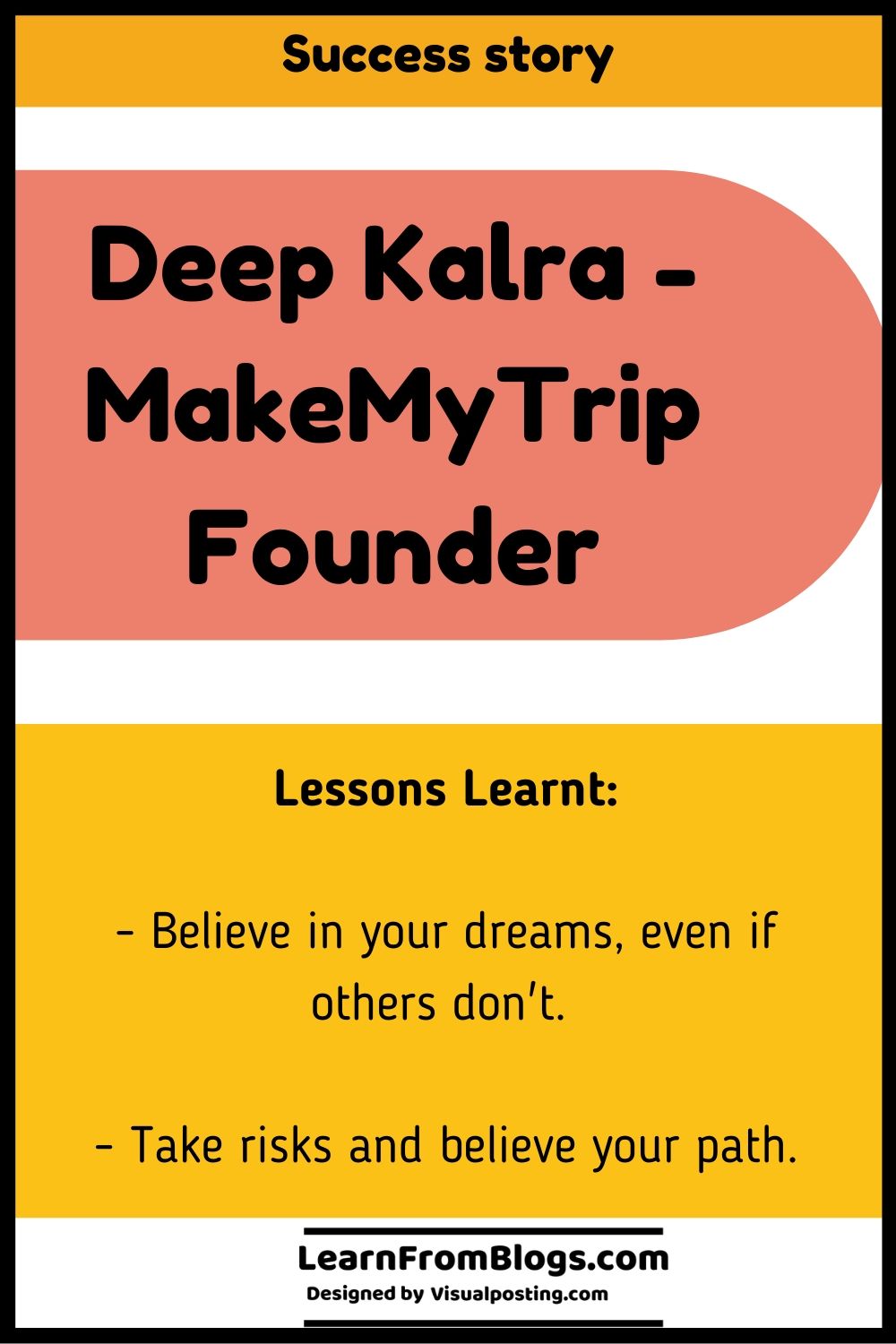 Deep Kalra was born and brought up in Hyderabad. He studied in Ahmedabad and Delhi. He studied Bachelor's in Economics from St. Stephens College in Delhi in the year 1990. He then went on to do his MBA from the Indian Institute of Management in Ahemdabad in the year 1992. Kalra decided to join ABN AMRO where he worked for three years. Later, he went on a long break. It was during this break that he decided to do something out of the box and gain new heights. He discovered the power of the internet and its massive reach. The idea of MakeMyTrip came to reality in the year 2000. In the beginning, they faced capital issues.

They also reduced employment due to multiple issues. The year 2005 changed the path of MakeMyTrip. It was the year when the railways started online bookings. The company made $5 million in 2008. MakeMyTrip had no turning back. It went on to deliver an amazing user experience to its customers.

- Believe in your dreams, even if others don't.

- Take risks and believe your path. 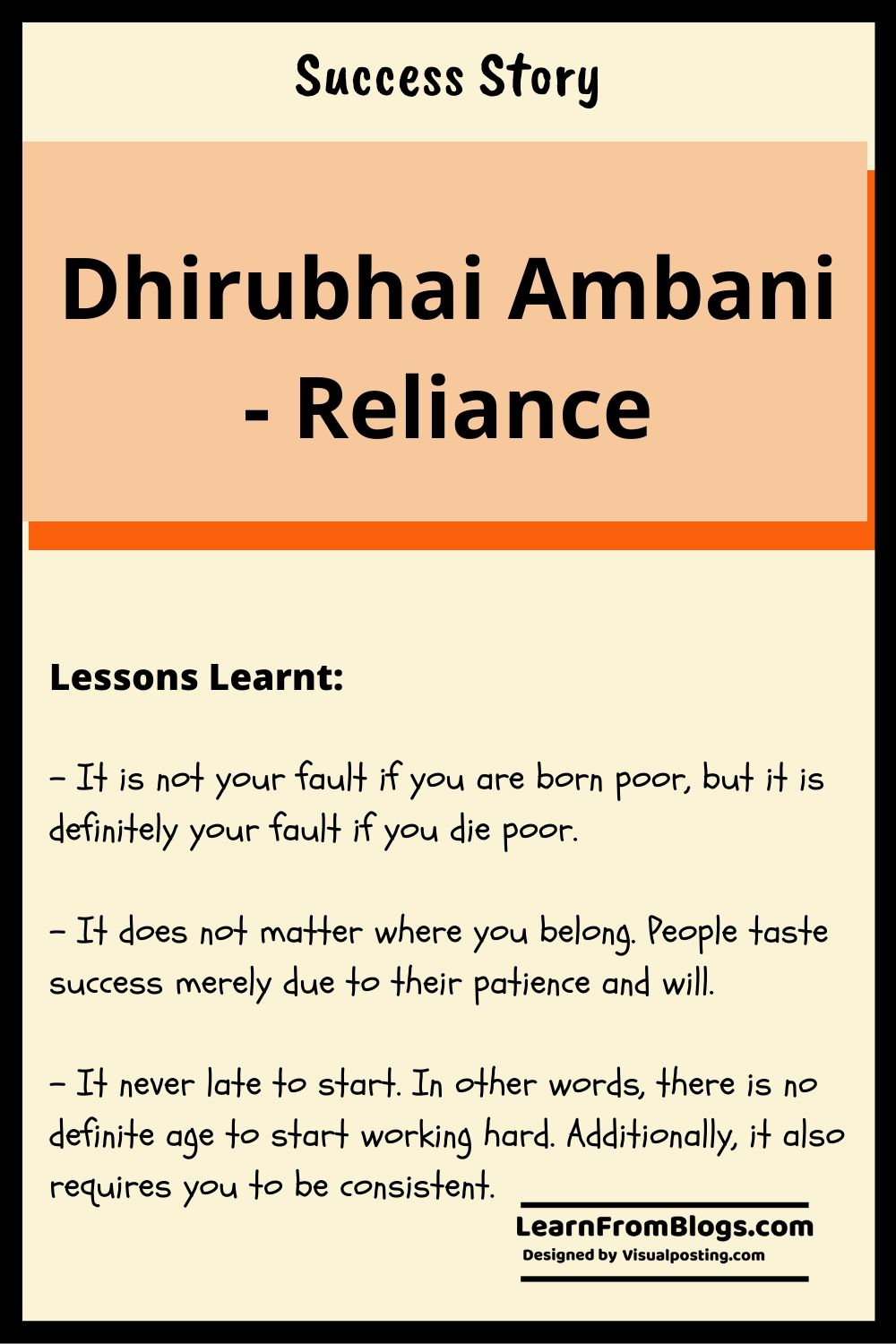 Dhirubhai Ambani was born on the 28th of December 1932. He was born in a lower-middle-class family. In addition, he was aware of the poverty that his family faced. He studied until tenth grade after. Soon after, he joined his brother to work in Yemen.

Dhirubhai was just 16 when he started working. He was paid just 300 Rs. per month. In 1958, he returned to India with simply 500 Rs. in hand. By this time, he was married and had a child. During these difficult times, he traded in spices and fabrics. Finally, in 1960, he set up the Reliance Commercial Corporation.

He founded the company alongside his cousin. But by 1965, he ended the partnership, and Dhirubhai then continued on his own. Reliance Textiles had an annual turnover of Rs. 70 crore by 1977. It was in this year that the company went public and his success.

The company was started just with an investment of Rs. 50,000 now had a worth of Rs. 75,000 crore. Reliance was also the first Indian Company to enter the list of Fortune 500 Companies.

- It does not matter where you belong. People taste success merely due to their patience and will.

- It never late to start. In other words, there is no definite age to start working hard. Additionally, it also requires you to be consistent. 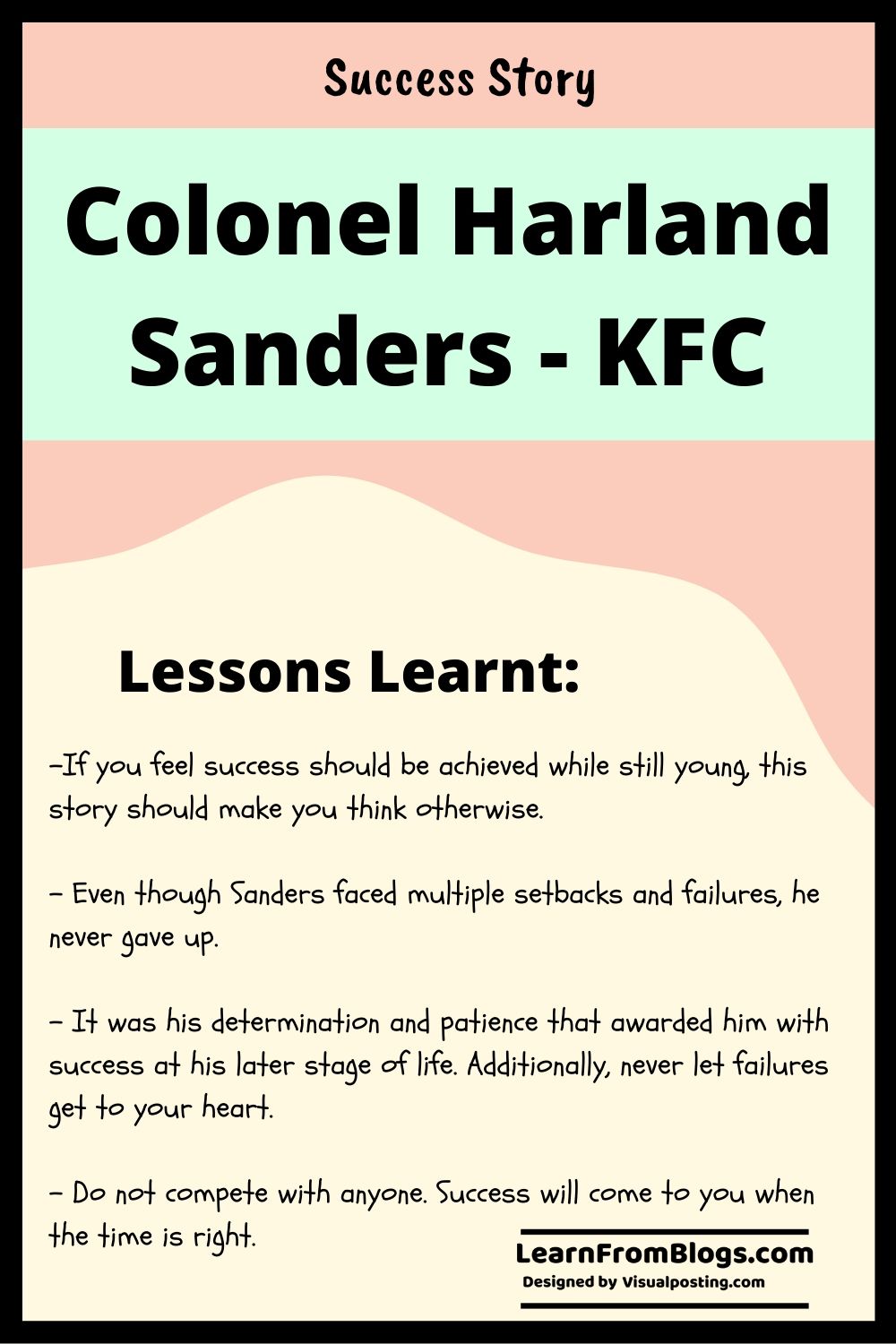 Colonel Harland Sanders in Henryville, IN in the year 1890. His father passed away when he was just six years old. He eventually, had to care for his siblings. In the seventh grade, he dropped out and started working as a farmhand. When turned 16, he faked his age to get into the United States Army.

He was soon fired and got a job as a railway laborer. He was again fired due to constant fights. Later, he took up a job as a life insurance salesman. Unfortunately, he was again fired. Sanders then founded a ferry boat company in the year 1920. Moreover, he tried cashing in the ferry boat business.

Yet he couldn't find success. When he was 40, he started selling chicken dishes at a service station. About four years later, he purchased a motel until World War 2 forced him to shut it down. After the war, he tried to promote the franchise. Besides, the recipe was rejected for 1009 times until he finally found success.

The secret recipe was then coined as 'Kentucky Fried Chicken'. KFC was then termed as a hit. The company expanded internationally. Eventually, Sanders sold his company for 2 million dollars. Today, Sanders's face still appears in its logo.

-If you feel success should be achieved while still young, this story should make you think otherwise.

- Even though Sanders faced multiple setbacks and failures, he never gave up.

- It was his determination and patience that awarded him with success at his later stage of life. Additionally, never let failures get to your heart.

- Do not compete with anyone. Success will come to you when the time is right.