inspiring quotes on success and failures 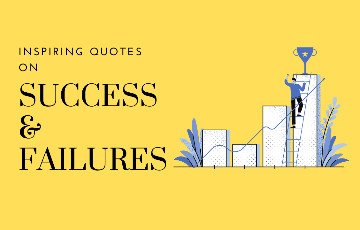 6 Powerful Quotes on Success and Failures

1. “Failure should be our teacher, not our undertaker. Failure is a delay, not defeat. It is a temporary detour, not a dead end. Failure is something we can avoid only by saying nothing, doing nothing, and being nothing.” – Denis Waitley

Don’t be afraid to take a step because you might lose your heart when you fail. This quote is a powerful reminder for you. Failure is just a delay and not a dead-end.

2. “Success is not final, failure is not fatal. It’s the courage to continue that counts.” – Winston Churchill.

The fear of failure has stopped many wonderful minds from shining in this world. Don’t become one. Have the courage to try. Face your failures. The courage to continue is what matters for you to win.

3. “The bridge of success is built on the pillars of failure.” – Unknown

A perfect building comes from a firm base. It’s the same in life too. Challenges and difficulties in life become a solid base. Failures are the pillars with which you will build success.

4. “No Man fails who does his best.” – Orison Swett Marden

Do your best and leave the rest. No man fails when best efforts are given as inputs.

5. “I think you have to try and fail because failure gets you closer to what you’re good at.” – Unknown.

When you succeed after your failures, you will have the strongest grit and determination to pursue anything. You become closer to perfection every time you get up after a failure. You will know what you are good at.

Don’t worry if you fail. Next time, when you try, you become resilient and intelligent in handling things than before.