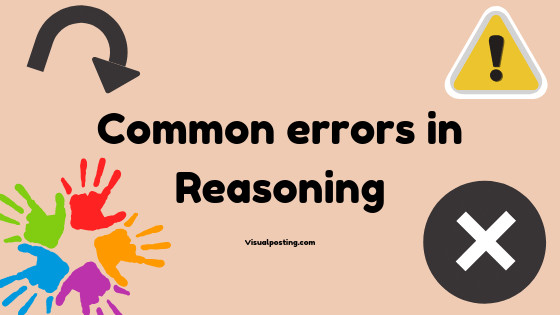 The reasoning is the act of thinking about a plan in a logical manner. When you can answer logically, it means you have a good sense of judgment. The reasoning will help you to come at the right decision whenever there is an argument or personal bias.

The importance of reasoning skills is defined in this article. If you want to succeed in a company, college or school, or any other place or field, it is important to have reasoning skills. In a highly competitive globe, you must think about everything in a logical and sensible way.

Logical reasoning has specified answers, unlike critical thinking. When you think in a critical manner, there are various options from which you have to pick the right one after analysis and evaluation.

The common errors in reasoning are as under:

Most of us decide a certain thing without the correct evidence. Jumping to a conclusion without concrete evidence is wrong in most cases. This is the common error of reasoning people do in offices and personal lives as well.

You cannot include an emotion whenever you are discussing an argument. It is one of the biggest errors people make while arguing.

Logical thinking involves many options. It is a common mistake which many of us make thinking that there are 1 or 2 options.

In a company, college or any other place, there are people who try to please everyone with their positive words and sentences. The actual motive of such people is something is to make other people agree with them. This is an error as every time you cannot make someone agree with only positive words containing no logical reasoning.

The human tendency is generally based on one rule which is “What I think is true”. Whenever you are working for a college assignment or company’s project, you cannot argue stating that what you think is right always. In an argument, when every member starts to think that he is true, the argument is useless.

Logical reasoning has many causes. But it is a wrong habit which everyone develops is to take one cause only ignoring others. There are several factors that cause an argument and reasoning and you cannot exclude those in a process.

To win an argument, you should not bring irrelevant events. The cause and effect must be related to each other if you want to prove right in the argument.

9. Assumption of truth for all

Various students study at a college. There are people of different nature in a company. You cannot say that two persons like the same thing. What one likes may not be liked by another person. Assuming that this is right for all is a common error in reasoning.

10. A mistake of conflict inflation

This can be explained with an example. Suppose you want to watch a new movie but experts say that it is not a good movie. You cannot judge the movie on the comments of experts only. It may happen that you like the movie after watching it.

In the same way, you cannot say that an argument is true because experts say it. It is necessary to see yourself.

Improving logical reasoning will help you a long way to get better results in school, college, and company. It is a tool by which you can win the hearts of people around you. Through logical reasoning, you can make people understood you in a better manner.